Telling Time – From Ancient Times to the Mechanical Wristwatch

We here at Bromberg’s are proud to offer the finest timepieces available and because these amazing tools are something we specialize in, we thought we™d share a little bit about how watches came to be. 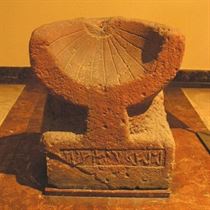 This ancient sundial with an Aramaic inscription is displayed in the archeological museum in Istanbul.

Throughout history untold man has sought to keep track of the hours of the day. In the earliest recorded history, man used various objects as sundials, also known as gnomons, to mark time during the day and to mark astrological events. Some examples of these time tellers are neolithic sites like Stonehenge and obelisks in ancient Egypt. In the new world entire cities were laid out out as calendars and clocks of sort, with sight lines angled throughout to provide precise views of the sun as it rose and set on important occasions. It is also known that prehistoric native North Americans were keepers of time through the use of formations known as medicine wheels, which are actually large clocks. In ancient China, Japan and India, there is ample evidence of the use of the water clock (also known as Clepsydra), the candle clock and the incense clock to mark time. The sand clock, or hourglass, is based on the same idea as the Clepsydra, began to appear on ship’s stowage lists in the 1300’s. 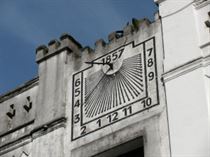 This example of a gnomon is situated on a wall in the heart of Curitiba, Brazil.

By most accounts the first mechanical clock was created in China in 725AD. The escapement of that clock, invented by a Buddhist monk named Yi Xing, relied on the use of hydraulics, with water steadily dripping, moving the wheel forward every 24 hours. (The escapement is the toothed wheel that makes the ticking sound in a mechanical clock.) Clocks in China became more sophisticated over the next few centuries but Europeans took clock making to a new level when they began using weights and eventually pendulums in mechanical clocks. 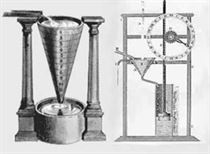 This is a drawing of a Greek water clock.

Early European mechanical clocks were found in monasteries and used to call monks to prayer in around the 13th century. They didn™t have hands or dials but instead sounded bells on the hour. Eventually, whole towns ran their business by the chimes of those bells. In the 1600’s Galileo took note of the periodic swinging of a chandelier and was struck with the idea of a pendulum to keep more accurate time. However, Dutch mathematician Christiaan Huygens is credited with inventing the pendulum clock, which was an especially important advancement for maritime endeavors. Huygens also patented an improved spring driven pocket watch in 1675, although “pocket clocks” have been referenced from as early the 1460’s and master locksmith Peter Henlein, from Nuremberg, was producing pocket watches by 1524. Often so called “clock watches” were fastened to clothing or worn on chain around the neck.

This is a illustration on an early Christian Huygens pendulum clock.

By the 17th century it had become fashionable for a man to wear his watch in his pocket, although women continued to wears watches as pendants. It was in the early 1600’s that glass began to be used to cover the face of watches. During this time watches were still very much luxury items. But by the end of the 18th century, watches were becoming somewhat more common, especial amongst those in the maritime trades. During this time watches still used a verge escapement, which was the same type of escapement used in large clocks. This kind of escapement didn™t use jeweling like later watches came to do to prevent wear from friction, so the watches tended to run very fast. by 1726 the cylinder escapement was perfected allowing watches to be much slimmer but not solving the friction problem. While the cylinder escapement was more accurate it required frequent cleaning due to excessive wear. The next big leap in escapement technology was the lever escapement, which could keep time to within a minute a day. This type of escapement is still used in many mechanical watches even to this day.

Here is a cylinder escapement, perfected by George Graham.

After the establishment of railroads, pocket watches became more prevalent than ever and they were an especially important tool for railroad engineers. After a massive train wreck in 1891 in Kipton, Ohio lead to nine lives lost and a heavily damaged train depot was attributed to one of the engineer’s watch being four minutes slow, the railway company enlisted a jeweler to help institute a new timekeeping policy specifying what kind of watches train engineers could use. That jeweler was Webb C. Ball and the phrase “on the Ball” is attributed to his insistence on accuracy in the timepieces used by railmen henceforth. 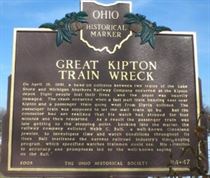 A historical marker at the site of the great Kipton train wreck. 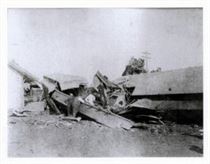 It is not really know who first decided to design a watch to be worn on the wrist but it became important militarily to be able to wear one’s watch on ones wrist toward the end of the 19th century. The wrist watch was much easier to check from horse back and when trying to coordinate military efforts in general. Easy wrist watches were really just pocket watches on a strap. But in the early 20th century wristwatches were being created for specific purposes. One early example is the timepiece that Louis Cartier created for his friend, aviator Alberto Santos-Dumont so that he could easily tell time while flying. 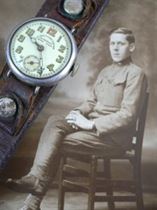 Campaign watches were an indispensable tool of war. 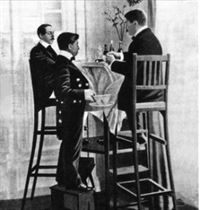 Louis Cartier is pictured here in Paris circa 1904, with his friend aviator Alberto Santos Dumont.

An early maker of the ever more popular wrist watch was Hans Wilsdorf, who with his brother-in-law Alfred Davis, created a watch company that would later be known as Rolex. Wilsdorf was obsessed with creating the most precise timepiece to date and in 1910 Rolex become the first watch to be certified as a chronometer in Switzerland. In 1914 Rolex won a class “A™ precision certificate from the Kew Observatory in Greenwich. In 1926 Rolex created the first waterproof wrist watch, which was given the name “Oyster” and featured a hermetically sealed case. Rolex invented and patented the very first self-winding watch movement in 1931. It uses a perpetual rotor which is the basis of design for every automatic watch ever made. To this day Rolex is concidered to be the standard bearer for automatic and waterproof watches worldwide. 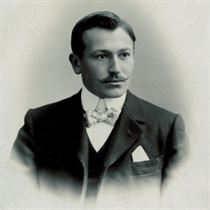 Hans Wilsdorf, the founder of Rolex, was a handsome and determined young man.

We here at Bromberg’s are proud to offer our customers an extensive collection of the very finest timepieces, including Rolex. To see the full selection of watch lines that we carry click here or stop in one of our stores.