June is the Pearl Month!

We here at Bromberg’s love pearls! Not only is pearl the birthstone for the month of June, it is also a timelessly popular choice for brides, and as we wrote in the blog last week, June is the most popular month for weddings. So today we are going to talk pearls. 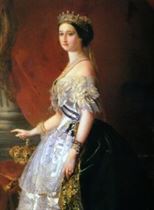 Pearls have long been called the “queen of gems and the gem of queens.” In fact, before Kokichi Mikimoto pioneered the very first cultured pearls in the late 19th century, pearls were so extremely rare that they were reserved pretty much exclusively for nobility and the very wealthy. Pearls were so prized at the height of the Roman Empire that historian Suetonius wrote that the Roman general Vitellius financed an entire military campaign by selling just one of his mother’s pearl earrings. 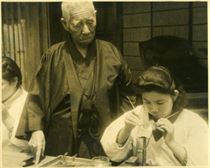 While natural pearls are obviously still sought after because of their beauty and extreme rarity, thankfully the advent of cultured pearls have made the beauty of this gem available to a much broader array of admirers. Because of this, we feel it is important that we pass along important information on how to care for this uniquely fascinating gem. But before we we get into pearl care and maintenance basics, we want to talk about how and why a pearl forms in the first place.

Add-A-Pearlâ„¢ necklaces are made up of natural pearls and are a popular gift for young girls.

It is a popularly held belief that a pearl is formed when a grain of sand finds it’s way into an oyster, but that is not exactly the case. Actually, a pearl forms when an irritant such as a wayward food particle becomes trapped in the mollusk. When the mollusk senses the object it begins to coat it with layers of the same two materials it uses to build it’s shell: layers of aragonite and conchiolin. In the majority of pearls, the mineral aragonite is arranged in sheets of flat, six-sided crystals. Between each sheet, the mollusk secretes a very thin layer of the membrane-forming protein conchiolin. This layering of material combines to form a substance called called nacre, commonly known as mother-of-pearl. Nacre has a crystalline structure that reflects light in a way to known as luster. There are non-nacreous pearls as well, conch pearls for example, but they are formed with calcite instead of aragonite and they do not have the luster of the traditional pearl.

This is an example of a conch pearl, which is a type of non-nacreous pearl.

Because pearls are organic gemstones they are more vulnerable to chemicals than other gems. That is why we advise people to always make pearls the last thing you put on, after any makeup, hairspray or perfumes. And because pearls (and the silk they are strung with) can be harmed by perspiration, make pearls they first thing you take off. Before storing pearls you should always wipe them down with a soft cloth. To prevent pearls from being scratched (and strands from being tangled) always fasten clasps on strands and brooches and store each item of pearl jewelry in it’s own separate compartment of your jewelry box or in a soft pouch. Avoid leaving pearls in a vault or security box for a lengthy period of time because the lack of humidity can dry pearls out. 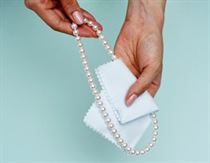 As with any gemstone jewelry, you should check the sureness of prongs, clasps and earring backs regularly to prevent losing a precious gem. If your pearl strand stretches or becomes loose it should be restrung. Bathing or swimming in pearls is not recommended as water can cause the silk thread to weaken and chlorine can damage the pearls themselves, as can detergents, vinegar, fruit juice. You should wipe your pearls with a soft cloth should come in contact with any of these things. Avoid high temperatures (such as a sauna) and prolonged direct sunlight while wearing your pearls and never, ever allow your pearls to be placed in an ultrasonic cleaner, as it will damage pearls. Remember to occasionally take your pearls to a specialist for cleaning and most importantly remember to wear and enjoy your pearls! As the late Jackie Kennedy said, “Pearls are always appropriate.”