Â Two Phish fans and lifelong acquaintances Catherine Anne Moulton and Ellis Curtis embarked on a journey with a group of friends to follow their favorite band for a few weeks in the summer of 2011. Shortly into the ten-stop tour, the couple realized that their journey together was going to be altogether different than the one they planned. 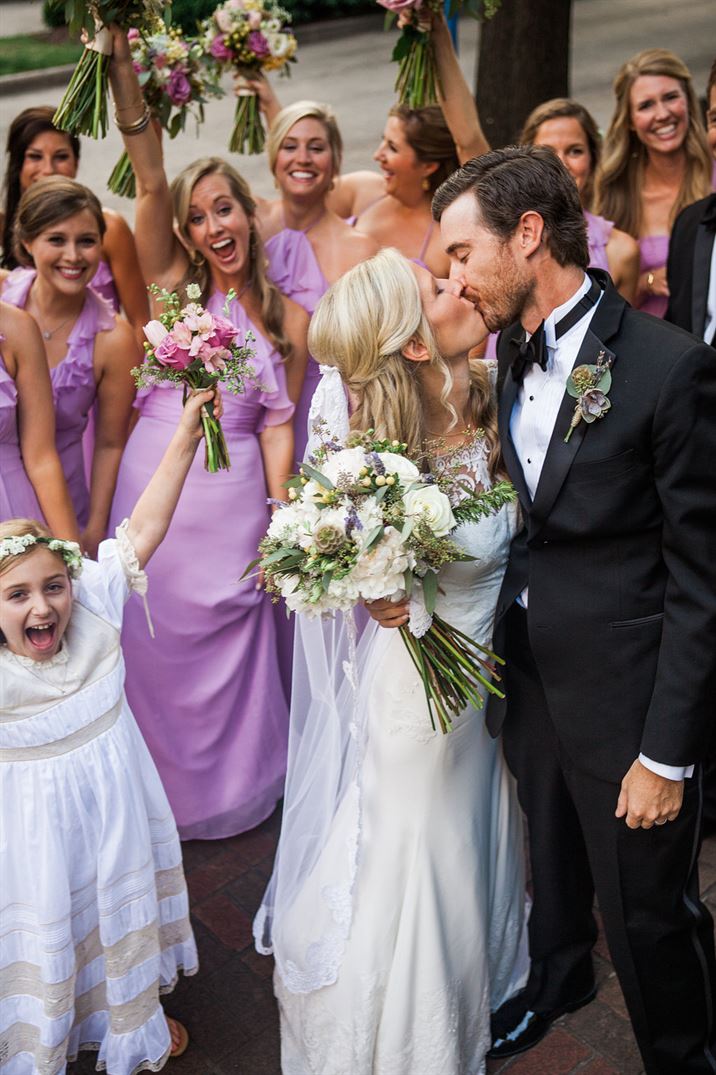 Catherine Anne Moulton and Ellis Curtis married June 28, 2014 in Birmingham, Alabama at Cathedral Church of the Advent. Our best wishes to the happy couple!

Ellis Curtis was good friends with Catherine Anne Moulton’s brother. Ellis was at their home frequently but there was a six-year age difference between Catherine Anne and Ellis; so the two did not interact much and were never in the same circles but they had been family friends forever. Ellis knew Catherine Anne was a fan of the band Phish and invited her to join him and others on a ten stop east coast tour over the summer of 2011. Atlanta, Maryland, New Jersey, and Virginia were some of the stops planned. Very early in their travels, Catherine Anne and Ellis discovered their love of the Phish was just the foundation for their mutual and growing attraction.Â They both knew if they crossed the line from family friends to something more than they both must be very serious about their relationship. Both were serious about pursuing a relationship so after returning from the road trip, Catherine Anne went to visit Ellis in Orlando, where he was living at the time for their first “official” date. Shortly afterwards, Catherine Anne traveled to Africa for six months. The couple got to know one another through letters and phone calls during that time and when she returned, they knew they wanted to live in the same city. Catherine Anne had always wanted to return to Colorado, where she had once lived. A mutual love of the outdoors and activities like hiking and skiing made Colorado a logical choice. In 2012, they decided to look for jobs and within a short time, relocated to Telluride.

Fast forward to June 29, 2013- the couple was back home in Birmingham for a friend’s wedding. Ellis had a proposal planned in Birmingham that weekend because he wanted their friends and family to be there to celebrate with them after he popped the question. Catherine Anne was staying at her parent’s home, in the same room she grew up in when Ellis arrived to propose. After Catherine Anne said yes, the celebration and the wedding planning began.

After considering all of the options, the couple decided they wanted to marry in their hometown with friends and family around them. The date of June 28, 2014 was available and happened to be Catherine Anne’s grandparents™ wedding anniversary. Catherine Anne’s sister is a wedding planner in Telluride; very convenient when you have a wedding from another city. She also enlisted the help of Emma from Mariee Ami Wedding Studio in Mountain Brook to help pull all of the details together.

Catherine Anne and her mother had recently discovered her mother’s wedding veil while cleaning out her grandparents™ home and it was in perfect condition. Catherine Anne opted to wear it as her “something old” for the wedding and found the perfect Lela Rose gown at Ivory and White boutique in Crestline to coordinate with the heirloom veil. Her “something blue” was her grandmother’s garter and her “something borrowed” was a pair of diamond earrings loaned to her by her mother for the occasion.

She selected bridesmaids™ gowns at Bella Bridesmaid in Homewood. A soft, flowing Amsale gown in pale lilac chiffon was the perfect style and offered her attendants different designs in the same fabric to select from to fit their own personal style.

The couple’s three nieces were flower girls; each wearing a small wreath of white flowers and simple white gowns for the occasion.

Ray and Janet from Flowerbuds in Cahaba Heights designed the ceremony, reception, and personal flowers for the day. Catherine Anne wanted to incorporate her love of Colorado into the wedding design so they brought in Aspen branches and decorate with a myriad of summer flowers to bring the outside in. Catherine Anne’s flowers were all in white: a hand-tied bouquet of peonies, white hypernicum, and white roses. The bridesmaids had similarly styled bouquets in lavender and green.

Ellis and Catherine Anne selected The Grateful Dead’s “They Love Each Other” as their first dance song, the band learning the song for them. As the band played and the night went on, guests were given glow sticks and glow-in-the-dark tambourines.

The couple departed the reception in a Volkswagen Beetle which had been decorated with a “peace” sign. After a wedding trip to Bali, the couple is finally back home and settled in Colorado. The day I spoke to Catherine Anne, she was just unboxing all of her Bromberg’s registry items and had just had her first cup of coffee in her Lastra mug.

Congratulations Catherine Anne and Ellis! Our Bromberg’s family and staff wishes you a lifetime of love and happiness together.