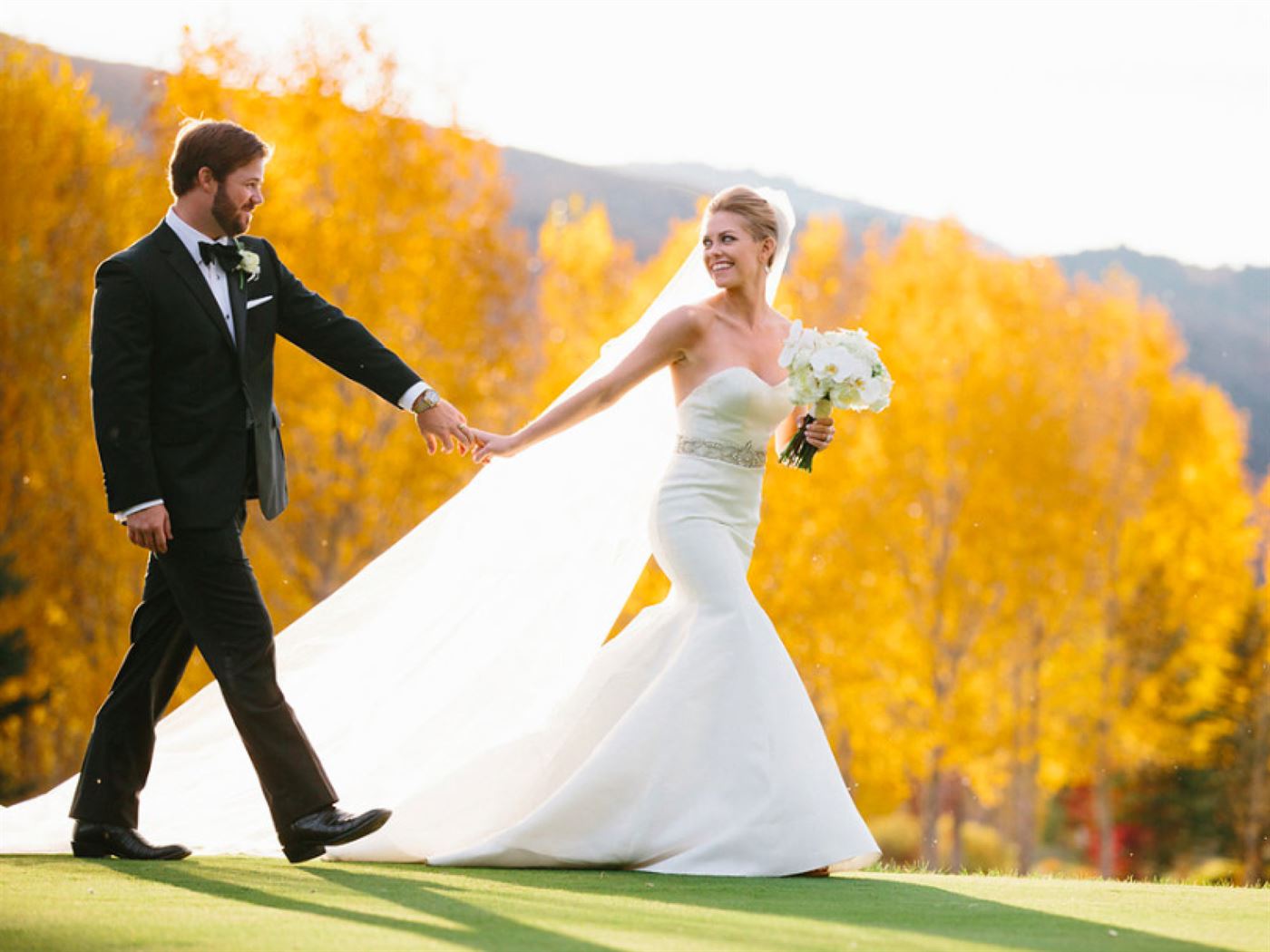 “No matter what your laundry list of requirements in choosing a mate, there has to be an element of good luck and good fortune and good timing”. ”“Patty Duke

Timing was everything for Jenna Stanke and Jeff Bissell. A little luck and a new job in a new city did not hurt, either. Even though they knew each other during their years at college, Jeff and Jenna never dated. In fact, one or the other was always dating someone else. Jeff’s move to Jenna’s hometown of Houston after graduation landed them in the same city again. When new-to-town Jeff asked Jenna to show him around her city, the stars aligned. Jenna and Jeff fell in love, resulting in a sweet marriage proposal in New York City and an October 2014 wedding in Aspen, Colorado.

Scroll below the photos to read their wedding story…

Jeff Bissell is from Birmingham, Alabama. Jenna Stanke is from Houston. They had mutual friends at the University of Alabama and knew each other. When they both graduated and moved back to their respective home towns in May of 2011, that’s where the story may have ended. A few months later, Jeff got a new job and moved to Houston. He got in touch with Jenna on a whim and asked her to show him around town. They began dating and within a few months, as they were celebrating her birthday, Jeff told Jenna he didn™t want her to date anyone else. The relationship grew and became more serious and when Jeff moved back to Birmingham in 2012, they continued to date long distance but Jeff wanted Jenna to move to Birmingham. Being traditional, Jenna wouldn™t move without a ring so unbeknownst to her, Jeff got a ring and planned a big surprise proposal.

Jenna’s sister is an actress living in New York City so when the couple planned a January 2014 trip to visit her complete with theatre and favorite restaurants, Jenna wasn™t remotely suspicious. After a horrible day of travel filled with delays, Jenna finally arrived at the airport at 1:00am and Jeff was there to meet her, the ring burning a hole in his pocket. When they got to the hotel, Jeff decided to pop the question and they spent the rest of the weekend celebrating.

Wedding plans started immediately. The couple decided on a destination wedding. Jenna’s family has a relationship with Aspen and the Roaring Fork Club so the couple decided on an October wedding in Aspen. Jenna enlisted Birmingham wedding planner Neillie Butler of Mariee Ami Wedding Studio in Mountain Brook to help with vendor selection and wedding plans in Aspen. Neillie is a long-time friend of the Bissell family.

Before Jenna moved to Birmingham, she and her mother selected her wedding gown from Nordstrom in Houston. The Lela Rose Couture fit and flare gown with a strapless, sweetheart neckline and beaded belt was the very last gown Jenna tried on. She paired it with a sheer illusion waist length and cathedral tiered veil with a bias edge and drop earrings.

Jenna’s family owns a printing business so they handled the design for the couple’s wedding invitation and stationery suite with Alexa Pulitzer in New Orleans. The couple flew out to Aspen in July for a menu tasting and to complete the final details. Deciding on an outdoor ceremony, Jenna and Jeff chose a rustic setting overlooking a grove of Aspen trees, their bright yellow color as the perfect backdrop for the deep navy blue bridesmaids™ gowns. The fit and flare floor-length gowns mimicked the bridal gown design but with an added peplum detail.

Jeff, his father, and the ten men in the wedding party wore classic black tuxedos.

The children in the wedding party were dressed in antique white outfits with vintage lace details.

The bride’s bouquet and most of the wedding flowers were designed of orchids and roses in all white tones. Arrangements in large vintage white urns decorated the altar. Rows of white chairs looked stunning against the green of the grass meadow and blazing yellow hues of the Aspen grove and mountains in the sunlight.

After the ceremony, guests made their way to the club for the reception. The rustic wooden beams of the club were draped in tiny white lights and an adjoining clear tent was draped in flowing, sheer white linen. Tables were dressed with antique white linens and set with wooden chiavari chairs and fine bone china. A variety of short and tall containers held lush arrangements of all-white flowers; hydrangea, stock, orchids, and roses filled the room. Jenna’s sleek and sophisticated four-tier wedding cake was trimmed with a delicate jewel-like edge. Jeff’s chocolate groom’s cake was made to look like his favorite brown cowboy boots.

Neillie helped Jenna and her mom with the perfect items for guest arrival gifts incorporating Texas and Alabama items packaged in wedding colors. The bridesmaids were given beautiful print silk robes as well that they all wore for photographs as they were getting ready for the day.

New: The earrings Jeff gave Jenna as a gift.

Borrowed and Blue: Jenna borrowed a blue sapphire ring from her grandmother.

One of Jenna’s favorite moments of the weekend happened as it began snowing as they made their way to the rehearsal dinner party on top of Aspen Mountain via gondola.

After their hunting safari/wedding trip to South Africa, Jenna and Jeff are living in Birmingham and have enjoyed using gifts from their Bromberg’s wedding registry during their first holiday season as a married couple.

Congratulations, Jenna and Jeff! Our Bromberg’s family and staff wishes you a lifetime of love and happiness together.