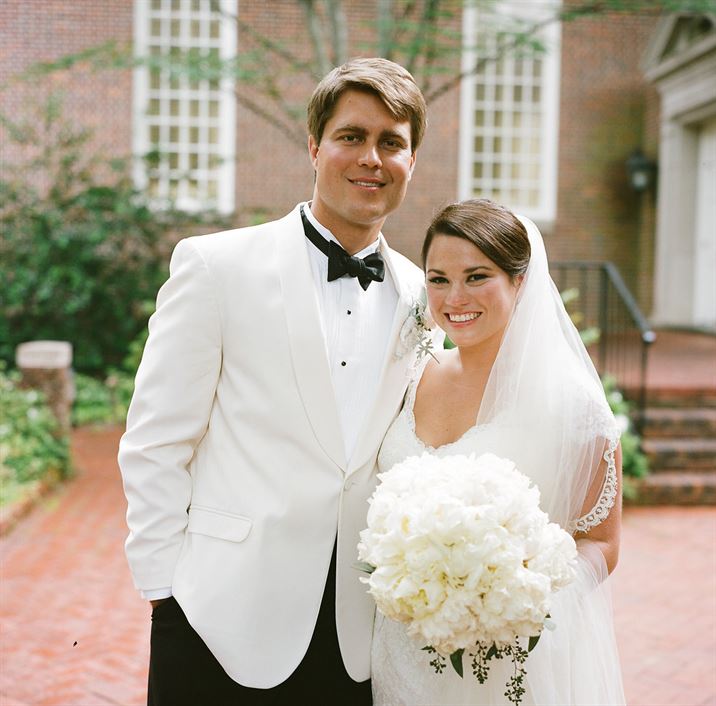 When Lindsey Badham’s mom met her date, Andrew Mills, she told her that Andrew was the man Lindsey would marry one day. This came as a shock to Lindsey, seeing as it was only the couple’s second date. Lindsey quickly laughed off the idea and thought her mother was crazy to suggest it. While no one knows exactly when or where this quote came to be, Lindsey found firsthand that mother actually does know best”¦ and she often knows you better than you know yourself.

(Read their full wedding story below the images.)

It was the night before Thanksgiving 2013, and University of Alabama student Lindsey Badham was home in Birmingham, planning to spend the evening with her family. She was trying to ignore the “let’s go out” texts and phone calls from friends who were also home for the weekend. After a while, she decided to go out to join her friends at Saw’s Juke Joint in Crestline for some pre-holiday fun and to catch up on what everyone had been doing since they™d all gone off to school. When Lindsey walked into the restaurant, she noticed Andrew. The typically shy Lindsey must have thought the handsome stranger was incredibly attractive because she went completely out of her comfort zone to initiate a conversation with him, much to her friends™ surprise. Lindsey asked Andrew if she could buy him a drink”¦ and Andrew responded the way a true Southern gentleman would. “That’s my job- let me get you a drink” he replied. The two talked for a while and when Andrew asked Lindsey for her phone number, she gave it to him.

A week later Andrew called and asked her out on their first date. Lindsey said even though she was very nervous at first, it was instantly very natural, familiar, and comfortable. On their second date, Lindsey introduced Andrew to her parents. It was then that Lindsey’s mother told her”¦ “This is the guy you are going to marry!” Lindsey told her mom she was crazy since she™d just met Andrew. Her mother told her “he’s beyond perfect for you. Trust me.” She told her mother it was way too soon and she was too young to think about marriage or a husband yet. But as Lindsey and Andrew began spending more time together, Lindsey quickly realized her mom was right she could not imagine her life without Andrew in it. After a while, they started talking about marriage. He loved her family. She loved his. All the pieces were falling into place. Six months later, Lindsey had the feeling that a proposal might be imminent. Her mother had dropped a few innocent hints so Lindsey started trying to dress cute and look her best every day, just in case Andrew’s proposal happened”¦ but it never did. Until the day and place Lindsey least expected it”¦ and Andrew had some unexpected help pulling it off.

Lindsey was babysitting for the Anderson’s that day”¦ June 27, 2014. The Badham and Anderson families are old friends. It was “the hottest day ever” Lindsey says. She had taken the Anderson children to the park to play and had just returned to the family’s residence when she noticed Mr. Anderson waiting for them outside. He gave Lindsey a package and asked her to take it to the front door while he talked to the children about something. Lindsey thought it was a bit strange but did as he asked. As she rounded the corner of the house, she saw Andrew approaching from the other side. She asked him what he was doing there and then it dawned on her-this was it! Her mouth dropped open and Lindsey dropped the package as Andrew dropped to one knee”¦

Andrew remembers exactly what he said: “If you promise to marry me and love me forever, I will love you for the rest of your life.”

Andrew had gotten some pre-proposal courage from the Anderson’s”¦ Clyde gave Andrew some proposal advice and came up with the idea about the package. Mrs. Anderson noticed how nervous Andrew was and gave him a shot of liquid courage- tequila- right before Lindsey’s arrival.

Andrew proposed to Lindsey with a Bromberg’s diamond her mother purchased years ago when she was out shopping for a silver spoon for Lindsey; a Badham family heirloom ring was used to create the setting.

Even though the proposal had not happened yet, Lindsey’s mother had already given Mountain Brook wedding planner Neillie Kirk Butler of Mariee Ami Wedding Studio the scoop and scheduled an appointment for the Monday following the engagement. Neillie has known Lindsey and her family for a long time so it was an easy process; the church and the club were booked and a date set in no time.

After trying on ”˜every gown in Birmingham™ Lindsey found the perfect one by accident. She was driving past Carriage House Weddings in Homewood and saw what she thought might be the perfect gown in their front window. It was. The tiny cap sleeve and lace back of the Augusta Jones gown was the perfect traditional, classic look Lindsey wanted for her wedding day and almost exactly the dress she™d dreamed and written about in her diary when she was young. She paired the gown with the cathedral length veil edged in Alencon lace that her mother wore on her own wedding day.

Since the Andersons played a role in the proposal, their two young daughters were asked to be flower girls.

Videographer Lance Holloway of Holloway Productions was hired to produce the wedding film. “It was the best money we spent because the entire day was a blur.” says Lindsey.

During the reception, Soulsation from Memphis played hits from past and present and kept everyone out on the dance floor all night long. The couple danced their first dance to the Barry White R& B classic Can™t Get Enough of Your Love. Lindsey and her father selected The Temptations iconic My Girl for their dance.

OLD: Her mother’s Alencon lace veil and a piece of lace that

BORROWED: A pair of Cathy Waterman pearl and diamond earrings loaned to her by Carrie Pizitz.

BLUE: Although Lindsey didn™t have an actual “something blue”-her mom wore a stunning blue gown!

Congratulations, LINDSEY AND ANDREW! The Bromberg’s family and staff wishes you a lifetime of love and happiness together.