“She walked through my front door.” ”“ Jay Wright 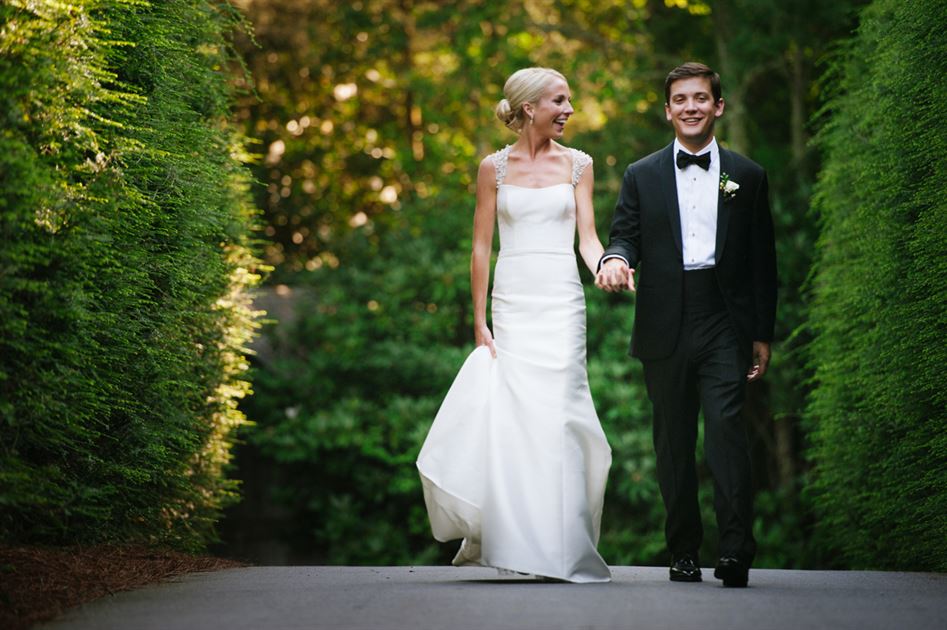 Imagine you™ve invited a friend over to grill out and your future wife walks in the door with her. That’s exactly what happened when Jay Wright met Emily Renfroe in December 2011. On their second anniversary, Jay asked Emily to be his wife. A month ago, the two married in Highlands, North Carolina with friends and family surrounding them.

(Scroll past photos to read story)

For Jay Wright, Christmas 2011 was going along as the holiday usually do”¦ parties and get-togethers with old friends in town for the holidays. On December 22, Jay and his roommate invited a friend over to grill out and Emily Renfroe was her houseguest, in town from school in Tuscaloosa before she went home to Atlanta for the holidays. As Jay likes to say, Emily simply walked through his front door. Little did either know at that moment that it would be for a lifetime but Jay was obviously smitten because he asked Emily to change her travel plans to remain in Birmingham for another day so he might take her out to dinner. She did”¦ and the two had dinner at Dram in Mountain Brook where they got to know one another a bit better.

Emily went to Atlanta to spend the holidays with her family. Jay called her on Christmas Eve to wish her a Merry Christmas and to make plans to get together after the holidays. Their second date was in New Orleans; both were in town for the University of Alabama’s National Championship game in January of 2012. Emily returned to Tuscaloosa and Jay to Birmingham but they began to see each other every week and were inseparable.

Emily moved to Birmingham just before graduation in May 2012 to take a job so dating was a lot easier since both lived in the same city. Eventually, the couple began to talk about marriage.

In December of 2013, Emily and Jay had plans to celebrate their second anniversary together. Emily knew Jay would propose one day but she really didn™t expect it until later- maybe in the spring of the following year. Jay made the plans for their anniversary celebration with drinks at the site of their first date, Dram, and dinner at Hot & Hot Fish Club. There was nothing out of the ordinary or anything to make Emily suspect it was anything more than drinks and dinner for their anniversary.

Little did Emily know that Jay had been to Bromberg & Company in Mountain Brook to select the perfect engagement ring for his proposal that evening. Jay had once worked at Bromberg’s so he’s part of the extended family. Jay traced an old ring of Emily’s onto paper and took it to the store to help with the sizing so the proposal would be a total surprise. The Mountain Brook staff was thrilled about his plan to marry Emily and they were all in on the secret.

After dinner, the couple went to Jay’s house where he gave Emily her Christmas present, a Barbour jacket. He encouraged her to try it on and when she put her hand into the pocket, she felt the ring. Jay knelt on one knee and asked her to be his wife. Emily, of course, said yes.

Jay and Emily had been to the Old Edwards Inn in Highlands, North Carolina and talked about possibly of getting married there one day. Emily’s grandparents have a home in Highlands so it is a special place for her family.

With Christmas days away and a lot of engagements happening over the holidays, the couple knew they needed to get a jump on their wedding plans. They knew the Inn was a popular wedding destination and dates might be limited so one of their first calls was to check dates and availability. With only two dates remaining on the 2014 calendar, the couple reserved July 26th for their wedding weekend and began to tell friends and family to save the date.

A stunning Amsale gown from TLC’s Say Yes to the Dress Atlanta’s Bridals by Lori was the perfect old Hollywood style Emily had imagined. The “Lenox” silk magnolia fit to flare gown was unadorned except for intricate beading at the shoulder and back.

The staff at the Old Edwards Inn makes the wedding planning process very easy; cakes, flowers, and many of the details were just a matter of making a few design decisions. Emily wanted lots of peonies, hydrangea, and white flowers for her bouquet along with silvery elements with a hint of soft, pale pink. She enlisted Oakleaf Flower & Garden, right across the street from the Inn to help her with her vision.

The pastry chef at the Inn designed Emily’s wedding cake; a S™mores Pit with an assortment of chocolate, marshmallows, and graham crackers was created for Jay in lieu of a groom’s cake.

Photographer Karlin Perez had photographed a friend’s wedding so using her for the wedding was another easy decision.

Emily’s “Something Old” tradition was her great-grandmother’s ring which she wore on her right hand. It was given to her by her father at the rehearsal dinner; since it was the same ring he used to propose to her mother years before, it was all the more sentimental. Her “Something New” was a pair of Jimmy Choo wedding shoes. Her “Something Borrowed” and “Something Blue” was a garter on loan for the occasion.

One of Emily’s favorite elements were the branches covered in white lights lining a small room at the Farm at Old Edwards Inn; it was magical. Another favorite detail were the Bailey’s Irish Cream and cookies passed to guests to end the evening.

After an extensive honeymoon to France, the couple is now home in Birmingham and just beginning to recover from wedding festivities.

Congratulations Emily and Jay! Our Bromberg’s family and staff wishes you a lifetime of love and happiness together.