Friends had wanted to set up Elisabeth Welden and Whit Woodring for a while but it just never happened. When the two finally did meet, the sparks flew. Europe, graduation, and two years of dating resulted in a sweet proposal on a cold day in November 2013. A year later, the couple prepares to celebrate their first holiday season as a married couple.

Whit Woodring from Atlanta and Elisabeth Welden of Mountain Brook were both students at the University of Alabama and had several mutual friends. The friends suspected they would hit it off if they ever met and tried to get them together. It finally happened when Elisabeth and Whit attended the same debutante ball in Montgomery. Their friends were finally able to make the introduction and the two talked a bit during the party. Afterwards, Elisabeth and Whit kept in touch, talking frequently while she was in Europe for six weeks. The day she returned, the couple had their first date when Whit invited her over to watch a movie. They were together all the time after that. Whit went with Elisabeth's family on spring break to the Cayman Islands their senior year and it was apparent to family and friends that the two were very serious about each other. After graduation, Whit got a job back in Atlanta and Elisabeth moved back to Birmingham. The two continued to date long distance as Whit set up an elaborate proposal that involved both families, their friends, and flying in Elisabeth's sister from Washington, D.C. for the big surprise.Â

Elisabeth is a runner and she would often ask Whit to go out on a walk or run with her when he was in town but he usually declined. Whit planned his proposal around her daily run and had her family in on the plans. The day of the proposal, it was cold outside and when Whit suggested they go out for a walk, Elisabeth declined, saying it was just too cold. Her family talked her into going out in spite of the weather. As they walked along Jemison Trail, Whit faked a hurt knee and said he wanted to take a break. The next thing Elisabeth knew, Whit was down on one knee and asked her to be his wife. While they were out, both families assembled at Elisabeth's house, including Elisabeth's sister, who had flown in from D.C. for the surprise. They all went to dinner at the club to celebrate and then returned back to the house for a party and lots of wedding talk.Â

The wedding plans started almost immediately. Luckily, Elisabeth is good friends with Louise, Emma, and Neillie from Marie-Ami Wedding Studio in Mountain Brook making the planning a simple process and a lot of fun, too. They immediately bookedÂ Canterbury United Methodist ChurchÂ and The Country Club of Birmingham for September 6th. After that, the rest fell into place. Shopping trips for the perfect gown resulted in a beautiful couture gown by British designer August Jones from the Carriage House. Elisabeth said she knew it was the one the moment she put it on. She added a tulle skirt to the original design for the ceremony which she removed for the reception, replacing it with a beaded belt.

The bridal party assembled at the Welden residence on the day of the wedding for Mimosas and some quality time together before the photos began. In keeping with the Southern tradition many Mountain Brook families still observe, the couple's wedding gifts were set upÂ on display for their guests to view.

The all-white floral design by Carole Sullivan of Lagniappe Designs in Crestline Village was one of the most important elements of the entire wedding for Elisabeth and one of her favorite details of the day.

Since Whit isn™t really a fan of chocolate cake but loves the small cake Baby Bites from Pastry Arts, they opted for chocolate and white Baby Bites, assembled into a “W” monogram in lieu of a groom's cake.

The reception menu included a “tailgate” station with some of Whit's favorite foods: mini corn dogs, sliders, and fries were a big hit with the groom and the guests.

The Fountain City Players played Motown favorites and kept everyone dancing all night. The couple danced their first dance to Stevie Wonder's You Are the Sunshine of My Life. Elisabeth had to have glow in the dark tambourines at the reception and the guests had a great time with them but the biggest hit of the night was a choreographed dance that Elisabeth and her father worked on for weeks to surprise guests.

Old: Elisabeth wore her mother's veil as her something old. It was the perfect finishing touch and although it was 29 years old, nothing had to be done to it.

Borrowed: Elisabeth's "something borrowed" was a pair of earrings borrowed from her grandmother.

Blue: Elisabeth's “something blue was the blue ribbon sewn into her bridal gown used to bustle it for the reception and a pair of blue Prada shoes she was obsessed with wearing for the reception.

After a wedding trip to Antiqua, Elisabeth and Whit live in Atlanta and are enjoying many of their Bromberg's gifts as they prepare for their first holiday season as a married couple.

Congratulations Elisabeth and Whit! Our Bromberg's family and staff wishes you a lifetime of love and happiness together. 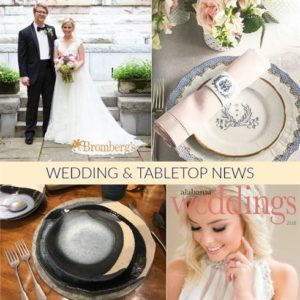 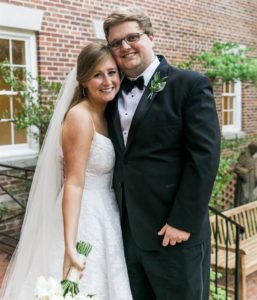 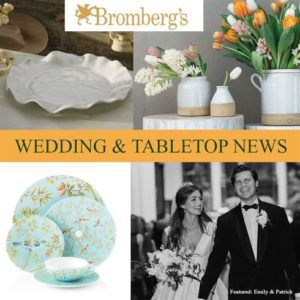