Tyler Higginbotham had seen Dorsey Cox at church from time to time but it wasn™t until a holiday party hosted by mutual friends the he actually met and talked to Dorsey for the first time. Dorsey is outgoing and Tyler is quiet and yet the two found a lot to talk about that evening. A year later Dorsey was surprised when Tyler asked her out on a coffee date. Â There was an instant attraction from that moment forward and after several group dates, Tyler asked Dorsey's mother for permission to date her; wanting to make sure she knew he had the best of intentions and respect for Dorsey.

Their relationship grew and each realized love was growing between them; marriage and their plans for the future were discussed. A proposal would be months later”¦ or so she thought.

Dorsey was not suspicious when Tyler asked her to put February 1st on her calendar for a special date. He told her what he would be wearing so she could dress accordingly. There had been snow and ice in Birmingham all week so when the day arrived and the sun was out, Dorsey's mom suggested a day of beauty and shopping. Dorsey still had no idea that a proposal was imminent; mainly because she knew it would take months for a ring design to be complete.

When Tyler picked her up, he told her he planned a date filled with her favorite things each remaining a surprise. Dorsey loves dance so Tyler surprised her with tickets to a dance performance for later that evening. She was so impressed that he was trying to do everything she loved in one date.

It was a beautiful afternoon so they drove up to the top of the city before heading out to dinner and the performance. As they talked, Tyler suggested Dorsey find the Frank Sinatra station on the radio. As they danced to the song, The Way You Look Tonight, Tyler got down on one knee and proposed, using her grandmother's ring he had borrowed from her mother to pop the question. Before proposing, Tyler had not only asked her mother, he talked to her father and her sister and asked for their blessings as well.

The couple was eager to marry and a short engagement ensued. Wedding plans fell into place as the date, pastor, venue and vendors lined up for May 3rd.

A beautiful Anne Barge wedding gown had been purchased years previously by Dorsey's mother when she owned a wedding shop in Jackson, Mississippi. Once Dorsey tried it on, they all agreed it was the perfect combination of tradition and timeless elegance. Since she had the gown for several years, this was Dorsey's “something old”.

Her “something new” was a beautiful embroidered handkerchief she carried with her bouquet given to her by her sister.

Dorsey's longtime friend called after the engagement to offer congratulations and her stunning lace-edged cathedral length veil as a “something borrowed” which was the perfect accessory for Dorsey's classic wedding gown.

The stunning engagement ring Tyler and Dorsey created together was her “something blue”.

All of the vendors participating in the wedding were special to Dorsey; they were all family and friends. Since she has had a lifelong love of flowers and design, Dorsey's mother wanted to create the wedding flowers. Family friend Betty Kao created her wedding cake and the chocolate ganache groom's cake- perfectly replicating the images Dorsey provided from her album of dream pictures.

Dorsey chose her sister as maid of honor and Tyler's father was his best man. She wore a soft pink silk taffeta gown while honorary bridesmaids were asked to wear pastel short dresses to for the occasion. Each selected frocks in a shade of pink as a tribute to Dorsey's lifelong love of the color.

The ceremony remained a priority throughout the plans and with the encouragement of their pastor the couple decided to write their own marriage vows. He reminded them how important it is to know what the promises are that they would make to one another.

Dorsey says it was an amazing experience to stand before their family and friends and read her vows to Tyler. Their main objective was to honor God and his role in their marriage and lives. The ceremony was just as they dreamed and perhaps more; everything a wedding should be.

After a beautiful honeymoon planned by the groom the couple is now at home in Birmingham and enjoying many of the gifts from their Bromberg's gift registry.

Congratulations Dorsey and Tyler! Our Bromberg's family and staff wishes you a lifetime of love and happiness together.

How to Pick the Perfect Engagement Ring Style Without Asking 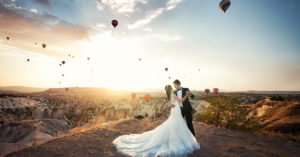 Bromberg’s: Preparing You for Wedding Season