“There is no such thing as accident; it is fate, misnamed.” ”“ Napoleon Bonaparte

(scroll below photos to read the story) 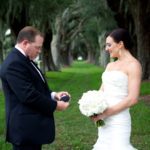 Neither Lauren Adair nor Dennis Goldasich were looking to be fixed up on a date when a mutual friend suggested it to them… on more than one occasion. Their personal cupid would not take no for an answer and had them meet one another even though they were not aware of her plans. Fate (and cupid) obviously knew better than they did. During the holiday season that year, Lauren and Dennis saw each other frequently; they met at a variety of social gatherings and shortly after that, they had their first official date. Before long, they were a couple. Three years later, they got married.

It took some sneaky tactics to get Lauren Adair and Dennis Goldasich together. As luck would have it, their mutual friend was a persistent matchmaker who finally managed to bring the two together for dinner at Birmingham’s Dodiyo’s Restaurant. The two obviously had something in common because they talked until they closed the restaurant down. Afterwards, they walked to another place to keep the conversation going. They made plans that night to meet for coffee the following week”¦ and coffee turned into dinner.

They decided to meet in Atlanta for the Alabama’s SEC Championship game so Dennis could help her find tickets for the game. It was no accident Dennis found tickets for Lauren very close to his own seat. Dennis ended up giving Lauren a ride back to Birmingham and after that, it was apparent their relationship was slowly turning into a romance. They finally had that first official date when Dennis invited Lauren over for dinner and cooked the only two things he knew how to cook: French Onion Soup and Spaghetti. Lauren left for a family vacation the next day and it was then they both realized how much they missed one another.

Dennis, Lauren and a group of friends planned a trip to California for Alabama’s national championship game in January, Lauren felt she might be falling for Dennis, especially when he stepped in and managed things when their travel arrangements went awry. Dennis was responsible, take-charge and caring; all of the characteristics Lauren valued in a partner. After they got back from California, the couple began to see each other exclusively and began the slow process of building a life together.

Sea Island is a sleepy resort community on the Georgia coast and a place that is very special to Lauren since her grandparents lived there and she spent many vacations there. Dennis, Lauren and his family were planning a trip to Sea Island and since it wasn™t anything unusual, Lauren was not even considering that Dennis would propose. Little did she know that Dennis told his family he was going to ask Lauren to marry him or that they were all in on the plan. During their relationship, the couple often went for long walks on the beach when they were visiting Sea Island and it was something special to them. According to his plan, Dennis asked everyone if they wanted to go for a walk on the beach”¦ and they all declined. As the couple took off for their walk, Lauren had absolutely no idea Dennis had a ring and was about to propose. As they walked along, the children hid to watch their dad ask Lauren to be his wife and they all cheered when she said yes.

Lauren had always wanted to be married at Sea Island and the couple never even considered having the wedding anywhere else. Within a week, Lauren had found her gown, a gorgeous fit and flare Vera Wang gown from Ivory & White in Crestline Village. Lauren had two lovely antique family heirloom brooches that she wore in her hair; her ensemble also featured a beaded belt by designer Erin Cole and a pair of Jimmy Choo shoes.

The bridesmaid gowns were selected from Bella Bridesmaid in Homewood. Since they were planning a destination wedding, much was left to the wedding team at Sea Island to source. Flowers, wedding cake and many other details were decided: the flowers were magnificent bold colors of bright greens, purples, pinks and white. Lauren’s bridal bouquet was a stunning all-white bouquet, which was hand-tied with silk satin ribbon. Her favorite detail was the peacock accents.

The couple chose the Cloister Spanish Lounge and the Cloister Ballroom for their ceremony and reception. The Cloister Resort on Sea Island is one of the top resorts in the country with a five-star rating and frequently chosen as Travel & Leisure’s top US resort. Steeped in Southern heritage and golfing tradition, the 85 year old resort is one of the world’s most beautiful vacation settings along five miles of private, pristine beach.

The couple hired the band Sleeping Booty; a high energy dance band complete with costume changes and a wide ranging playlist to keep the guests on the dance floor for the entire reception.

After a honeymoon trip to Greece, the couple is residing in Birmingham and enjoying many of their wedding gifts from Bromberg’s.

Congratulations Lauren and Dennis! Bromberg’s wishes you a lifetime of love and happiness together.