A glance across the laundry room freshman year at Ole Miss and a chance introduction by friends later that same day was more than just a coincidence”¦ it was fate. Lillian Askins and Chris Lalo became instant friends and a romance quickly bloomed. Four years later, Chris asked Lillian to be his wife at their favorite spot on campus”¦ on bended knee with a gorgeous engagement ring in hand. She said yes and months later, they have graduated from college, planned a wedding, married, and now are starting an exciting new life together.

Freshman year at Ole Miss in Oxford, Mississippi”¦ Lillian Askins is in the laundry room when she makes eye contact with a cute boy. They don™t speak but each obviously notices the other. Hours later, they are introduced by mutual friends and both remember “the look” they exchanged earlier that day. The couple became friends; going on runs together around Lake Patsy which quickly became “their” place to escape and was the site of their first official date-- a run around the lake. The couple knew from the beginning of their relationship that they were destined to be together and felt that they would marry one day.  They dated throughout their time at Ole Miss”¦ through the football weekends and sorority formals and discussed marriage for 3 Â½ years. Little did Lillian know that as she got dressed to go to a party before her sorority formal on April 1, 2011, Chris had other plans for that night.

As they talked about getting married one day, Lillian had always cautioned Chris that she wanted to be dressed nicely when he popped the question, not in shorts and a t-shirt or with no make-up. Since they were going out for the evening, Lillian had no clue Chris was about to propose to her as she got dressed to go to the party. Chris had the ring for a while but wanted the perfect, private moment for the proposal. He suggested they stop at Lake Patsy before the party for a few minutes and Lillian suspected it was possible that he might pop the question”¦ especially as he took her out to a gazebo on the water. As the sun was setting, Chris took out a ring and told Lillian “this is the place I fell in love with you” as he asked her to be his wife. Afterwards, the couple had a private celebration at their favorite restaurant in Oxford. As they made calls to family and friends to tell them the news, they had to assure them it was no April Fool's Day joke”¦ it was the real thing! After the candlelight ceremony with her sorority, Lillian's parents and her aunt and uncle hosted a fantastic engagement party for the couple at Birmingham Chef Chris Hastings™ prestigious Hot & Hot Fish Club.

Wedding planning started immediately. Since they had talked marriage for quite a while, Lillian had given some thought to what she wanted for her wedding. She knew she wanted a very classic Southern wedding and she also knew that she wanted the wedding to be in the church where she grew up, Independent Presbyterian Church in Birmingham. Since her mother and father had married at IPC twenty-four years earlier, Lillian knew she would marry there one day. Since she wanted a classic and timeless wedding, a traditional daytime wedding seemed perfect. As they contemplated the reception, they decided that The Grand Hall at the church was just right for the wedding luncheon immediately following the reception.

One of the first decisions Lillian and Chris made was to secure Arden Ward of Arden Photography for their photographs. Lillian says “Besides my husband (of course), my photographer was the most important decision I could make for my wedding day. Cake gets eaten, dresses get hung in storage, but pictures last forever. Arden's personality and general demeanor brings calm to a stressful day.”

Once that was done, the hunt for the dress began. It did not take long for Lillian to find the perfect Anne Barge gown at The White Room which was customized with sleeves to make it the perfect combination of both youth and tradition for her classic wedding. Chris and the men wore traditional cutaway suits from Mr. Burch Formal Wear in Mountain Brook and the bridesmaids wore a timeless petal pink Watters strapless gown with a short shrug jacket from Bridesmaids, Inc. in Homewood.

Barb from Barb's Cakes designed the wedding French vanilla almond cake with six different graduated tiers of white cake iced with buttercream separated by fresh flowers. The groom's cake was a collaboration between the bride and Magic Muffins and featured five tiers of homemade chocolate cake with raspberry filling iced in variegated shades of chocolate swirls ranging from white chocolate to dark, accented with raspberries.

The beautiful spring floral arrangements were designed by Flowerbuds of Cahaba Heights. Janet Jackson and Ray Jordan used white roses, hydrangea, lilies, gardenia, and bright green flowers along with touches of pink to create the classic arrangements and bouquets for the ceremony and reception. Since the name Lillian translates to lily of the valley, they were used for the boutonnieres and in the bridal bouquet a detail Lillian had planned with friends in the seventh grade.

For the wedding luncheon, an elaborate menu of elegant Southern classics was prepared by Kim Martin. Appetizers included Stuffed Quail Eggs, Mushroom Tarts, and Cheese Straws. She Crab Soup and a mixed green salad with pears and blue cheese were offered for the first course. The main course was Cold Peppered Tenderloin of Beef and Chicken Wellington.

After a romantic honeymoon in Charleston, South filled with carriage rides and history, the couple has settled into married life in Huntsville. They are enjoying their items from their Bromberg's gift registry including:

Congratulations Lillian and Chris! Our very best wishes to you for a lifetime of love and long and happy life together. 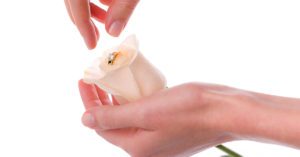